Photo by Artem Sapegin on Unsplash

(This is an early draft of an incomplete article. The figures and tables might be used later)

Converting between GtCO2 and GtC: 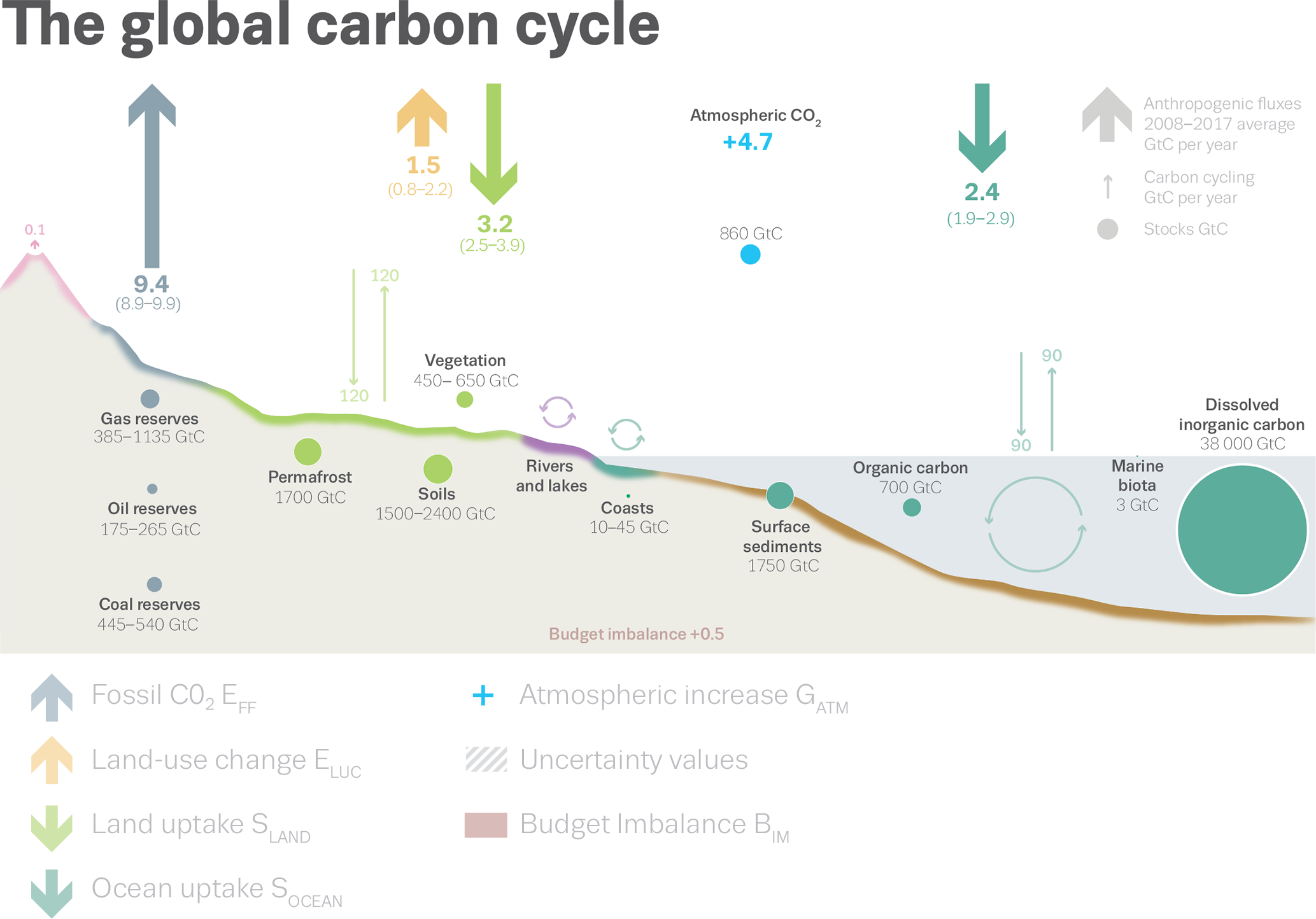 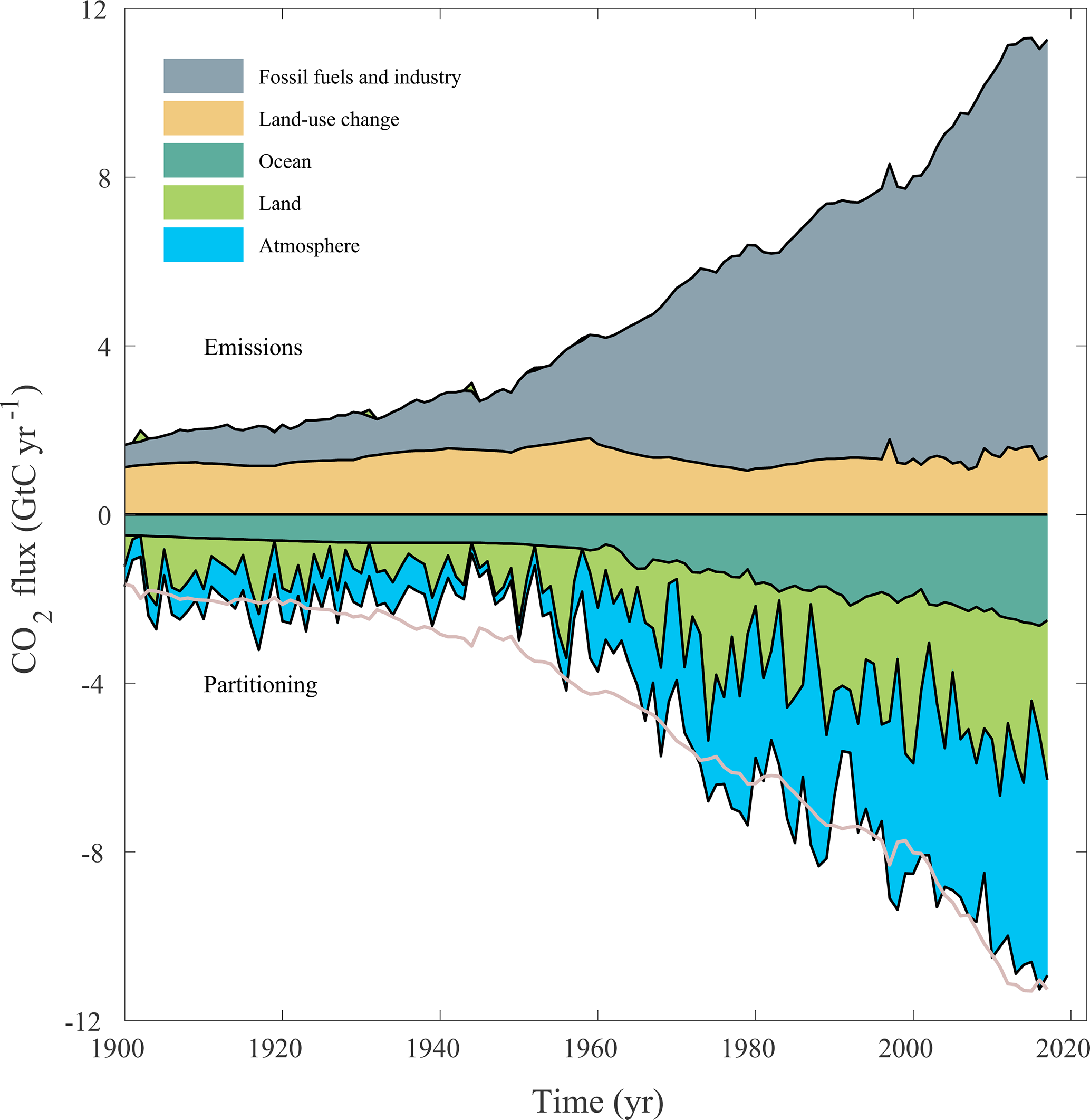 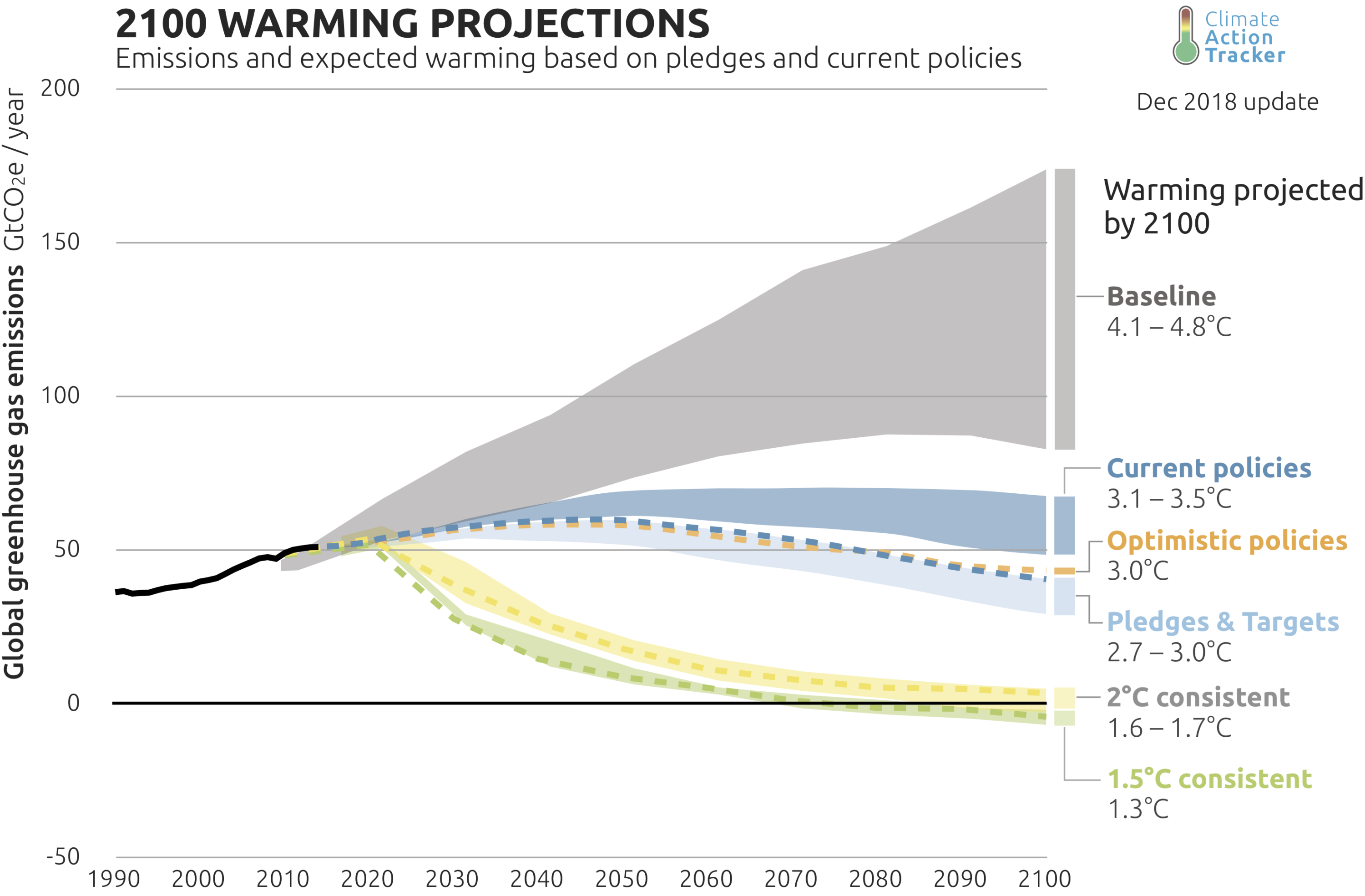 Global emissions projections to 2030 and emissions gaps to Paris target 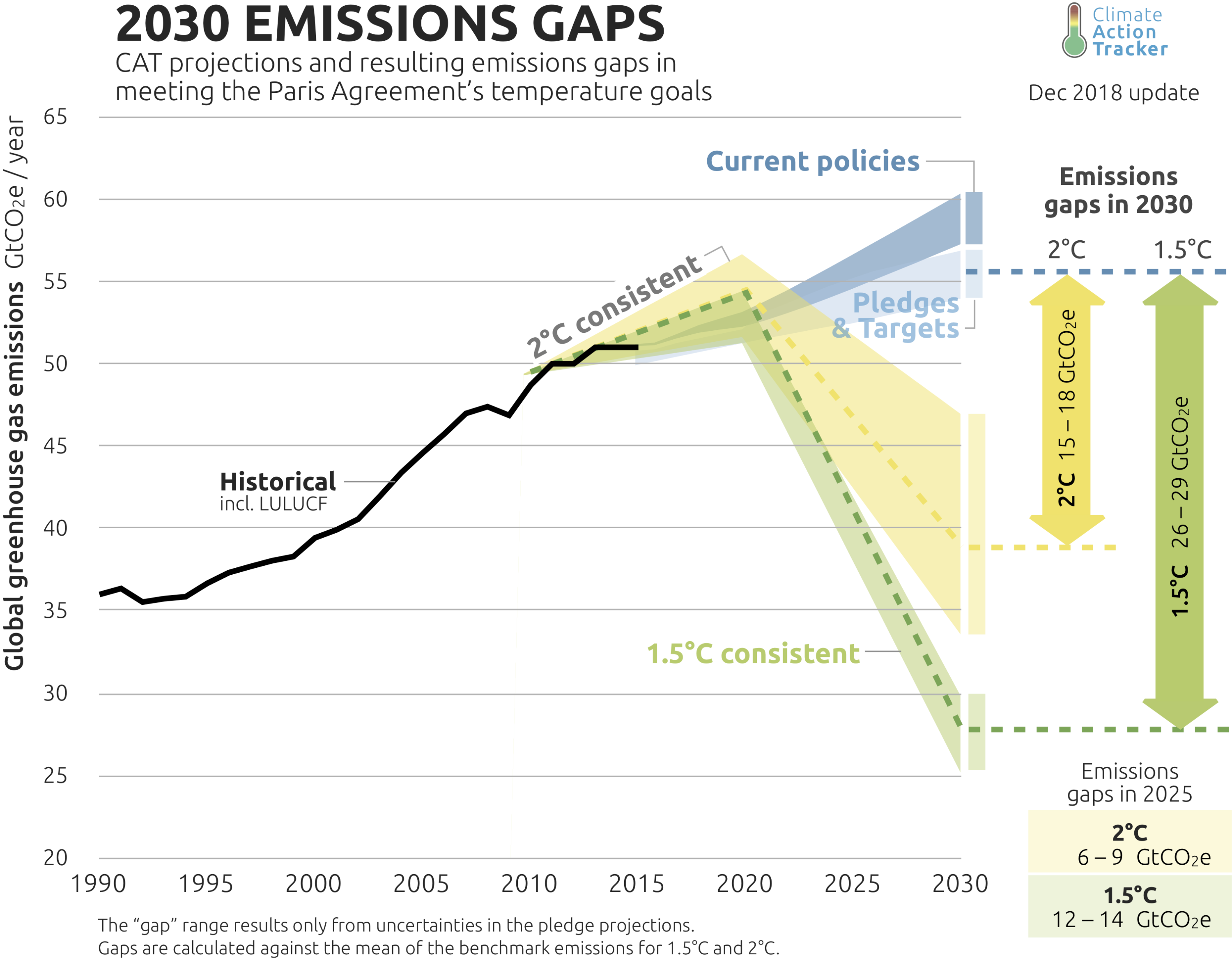 The remaining carbon budget for 1.5°C and its uncertainties 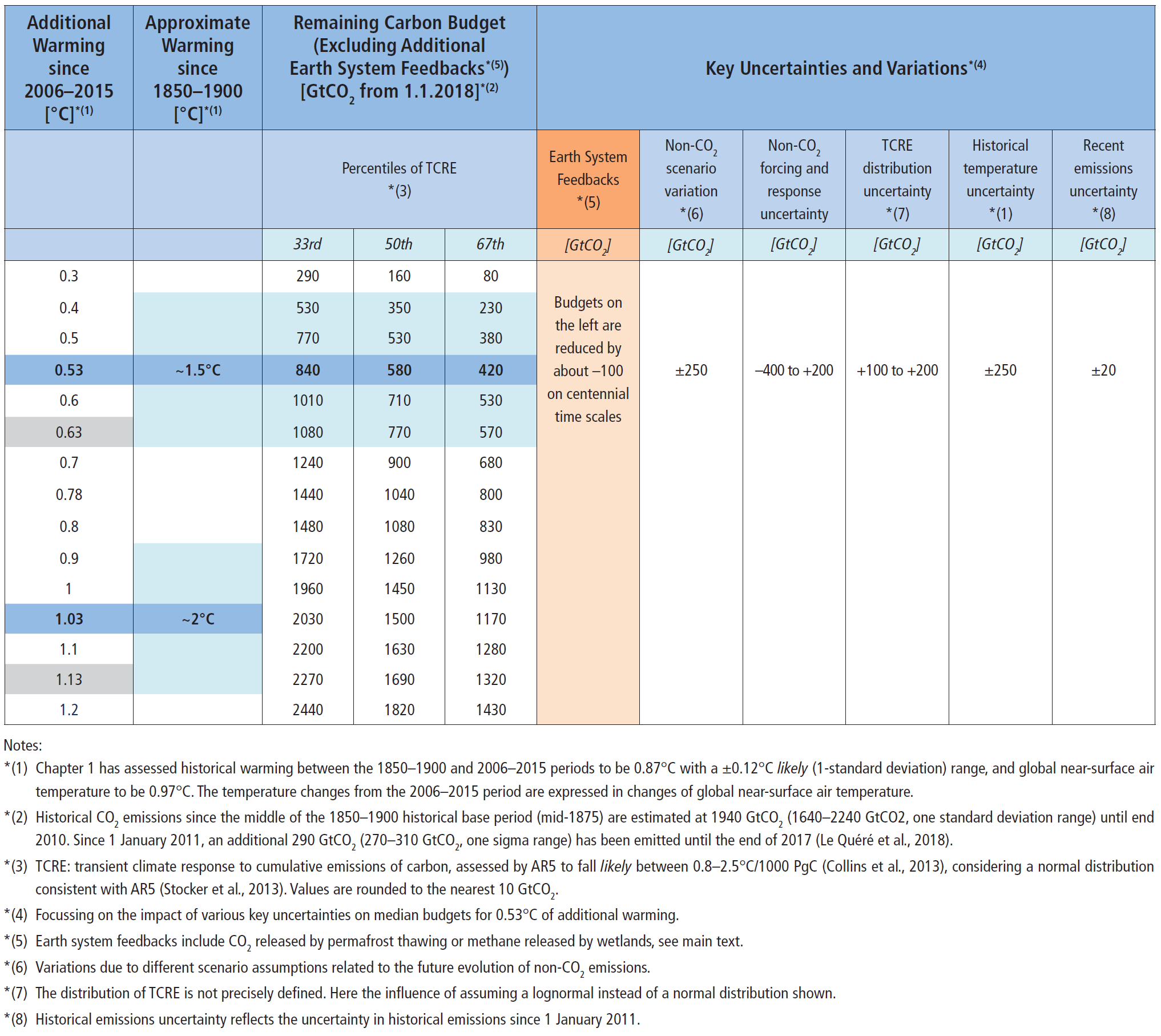 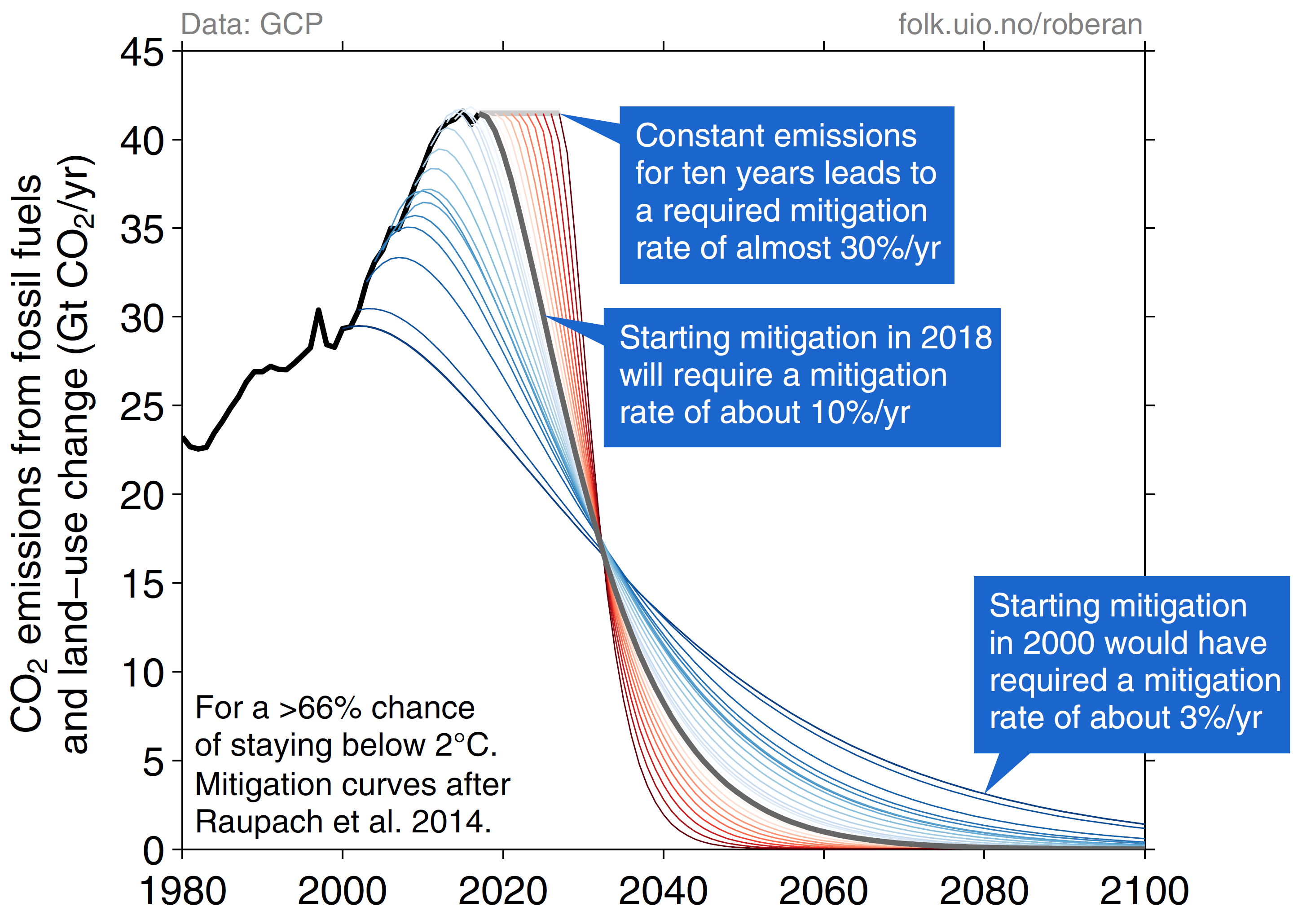 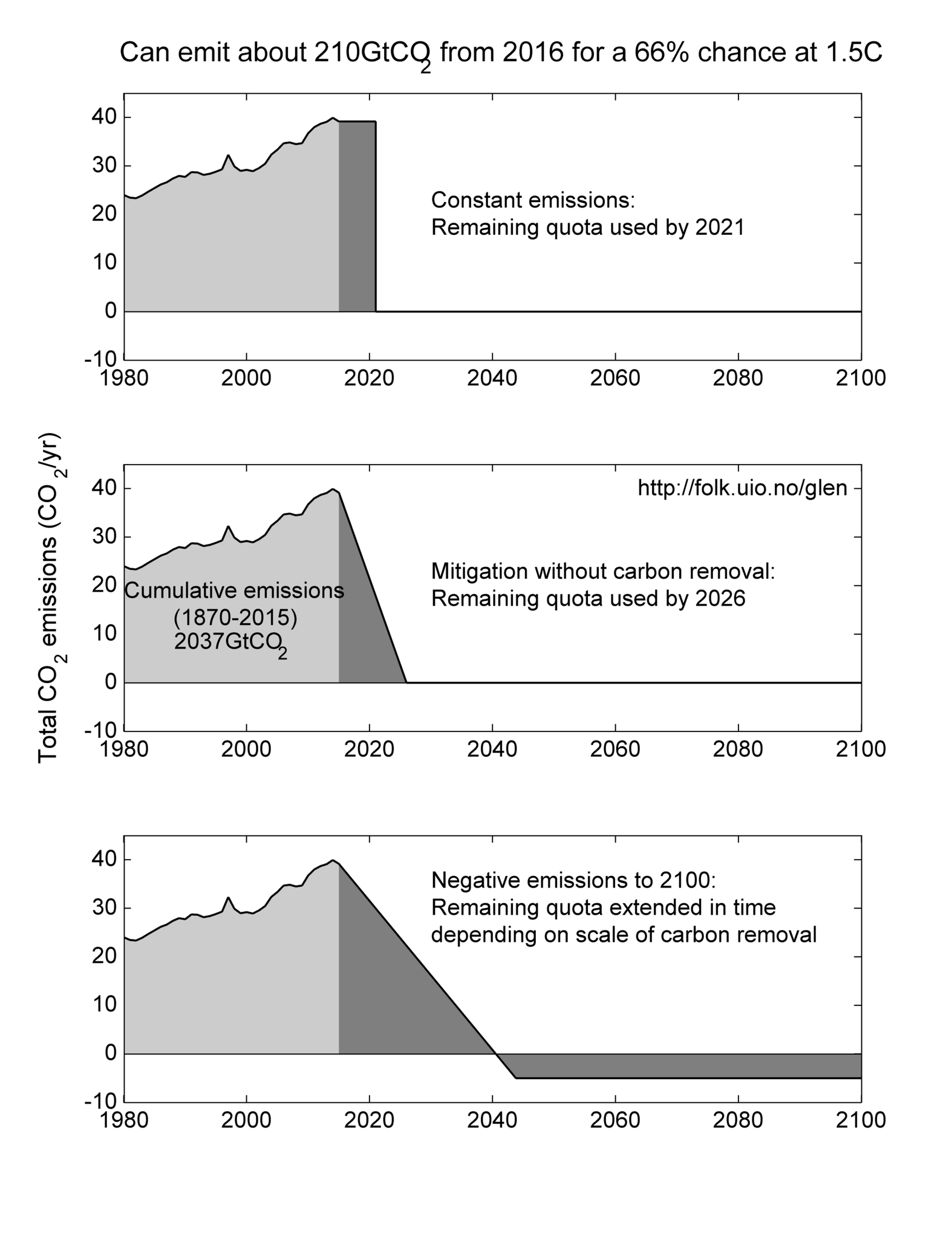 These articles explain the need to reduce our greenhouse gas emissions today, rather than relying on the hope of developing effective ‘negative emissions’ technologies in the future: We should reduce our reliance on BECCS, as it’s likely to be very destructive when scaled up. Historical background on BECCS13: 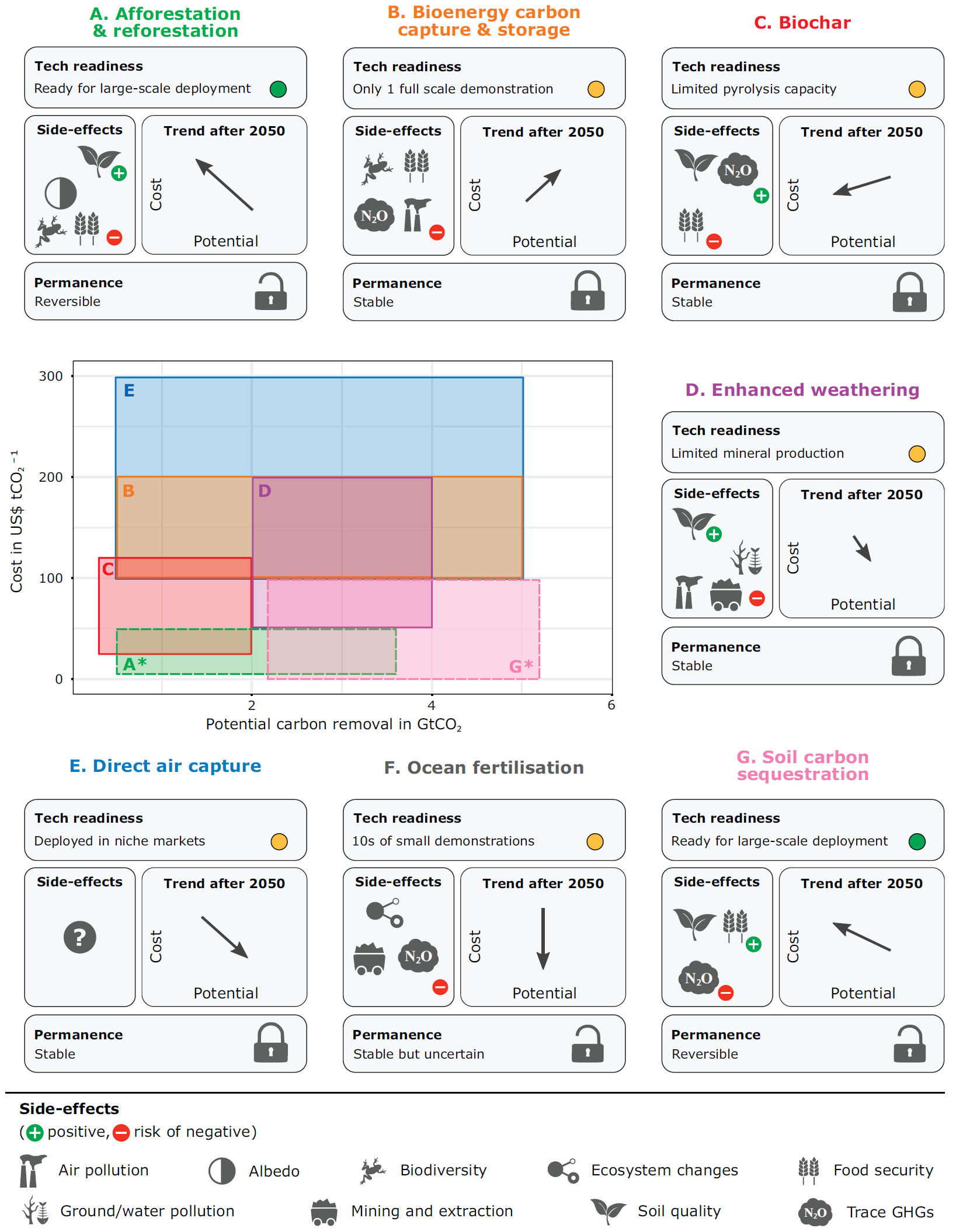 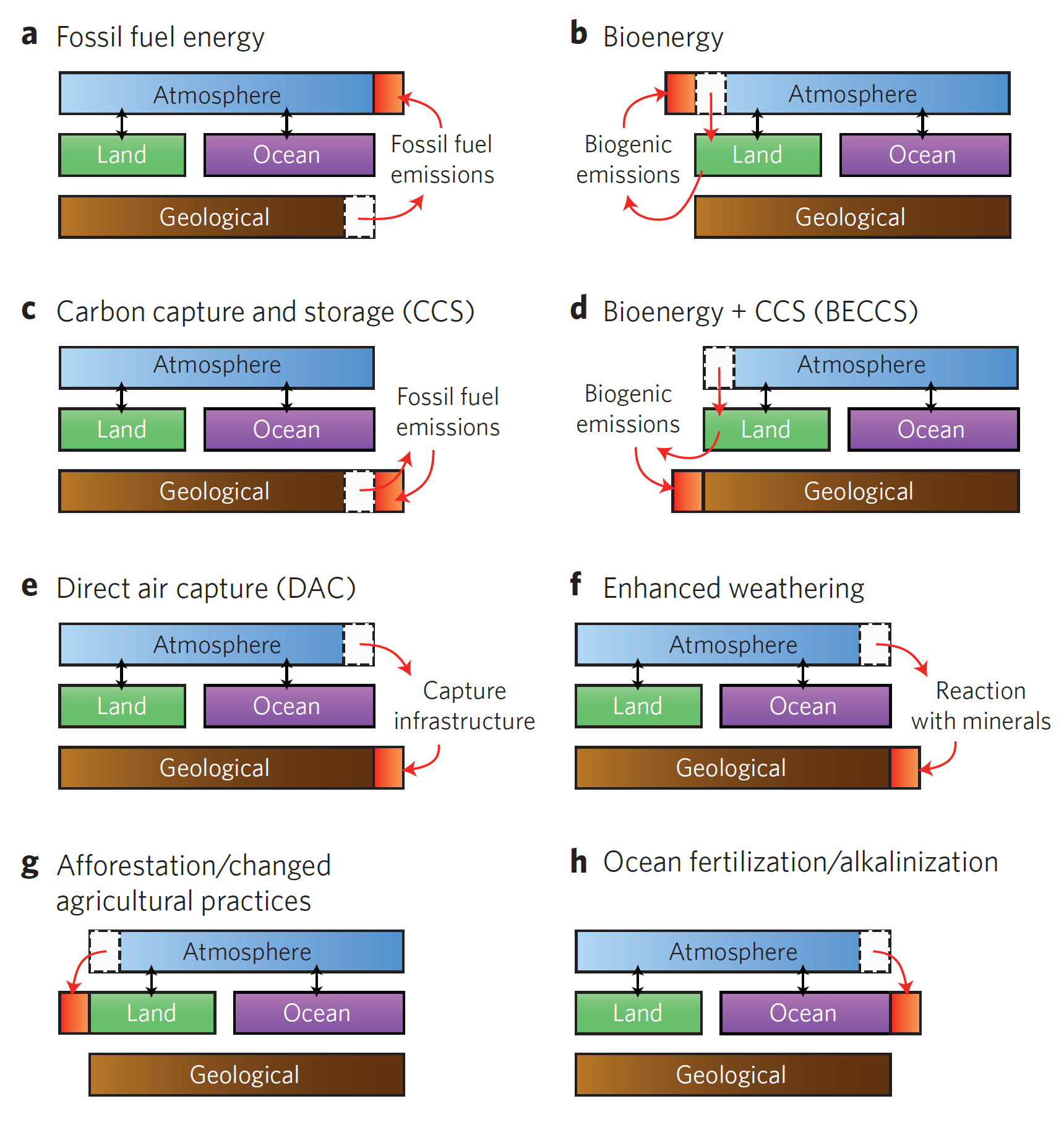 “Of the 114 scenarios assessed by the IPCC leading to forcing values of around 2.6 Wm−2 (likely probability for 2°C), 104 show net CDR in the second half of the century, mostly achieved by bioenergy with CCS (BECCS)” (CDR is ‘carbon dioxide removal’, or ‘negative emissions’)

A decarbonisation scenario that avoids BECCS.

“This analysis shows that alternative pathways exist allowing for more moderate use and postponement of BECCS”. BECCS can “be limited by a range of societal and technological factors and choices” … “A rapid transformation in energy consumption and land use is needed in all scenarios”

Avoiding reliance on BECCS by decarbonising via alternative pathways 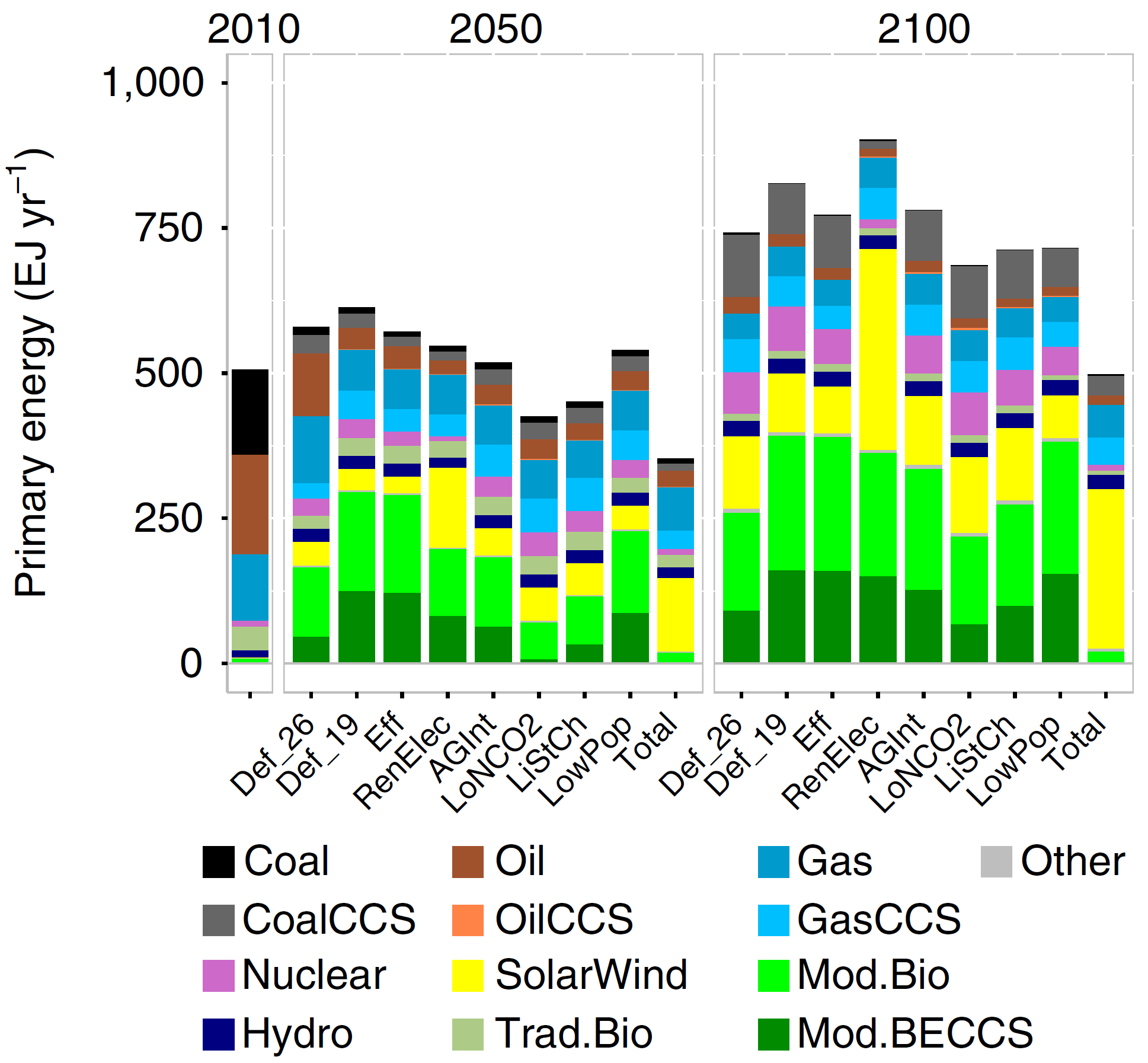 Trad.Bio: traditional bioenergy Mod.Bio: modern bioenergy Mod.BECCS: modern BECCS The baseline for this scenario is IPCC’s ‘SSP2’ ‘Middle of the road’. Key point: there’s no BECCS in the ‘Total’ scenario (which combines the other scenarios in this study). Many decarbonisation scenarios rely on BECCS to reach net-zero emissions (eg. some scenarios used by IPCC, some IEA scenarios, Shell’s ‘Sky’ scenario, etc). There are concerns about damage that would be caused by large-scale BECCS. The primary energy mix is mostly solar and wind in 2100, with a continued reliance on gas, gas with CCS, coal with CCS, oil, and nuclear power. Other groups recommend energy mixes with far less reliance on fossil fuels. The van Vuuren et al (2018) article was discussed by David Roberts in Vox16 and here:

World can limit global warming to 1.5C ‘without BECCS’ 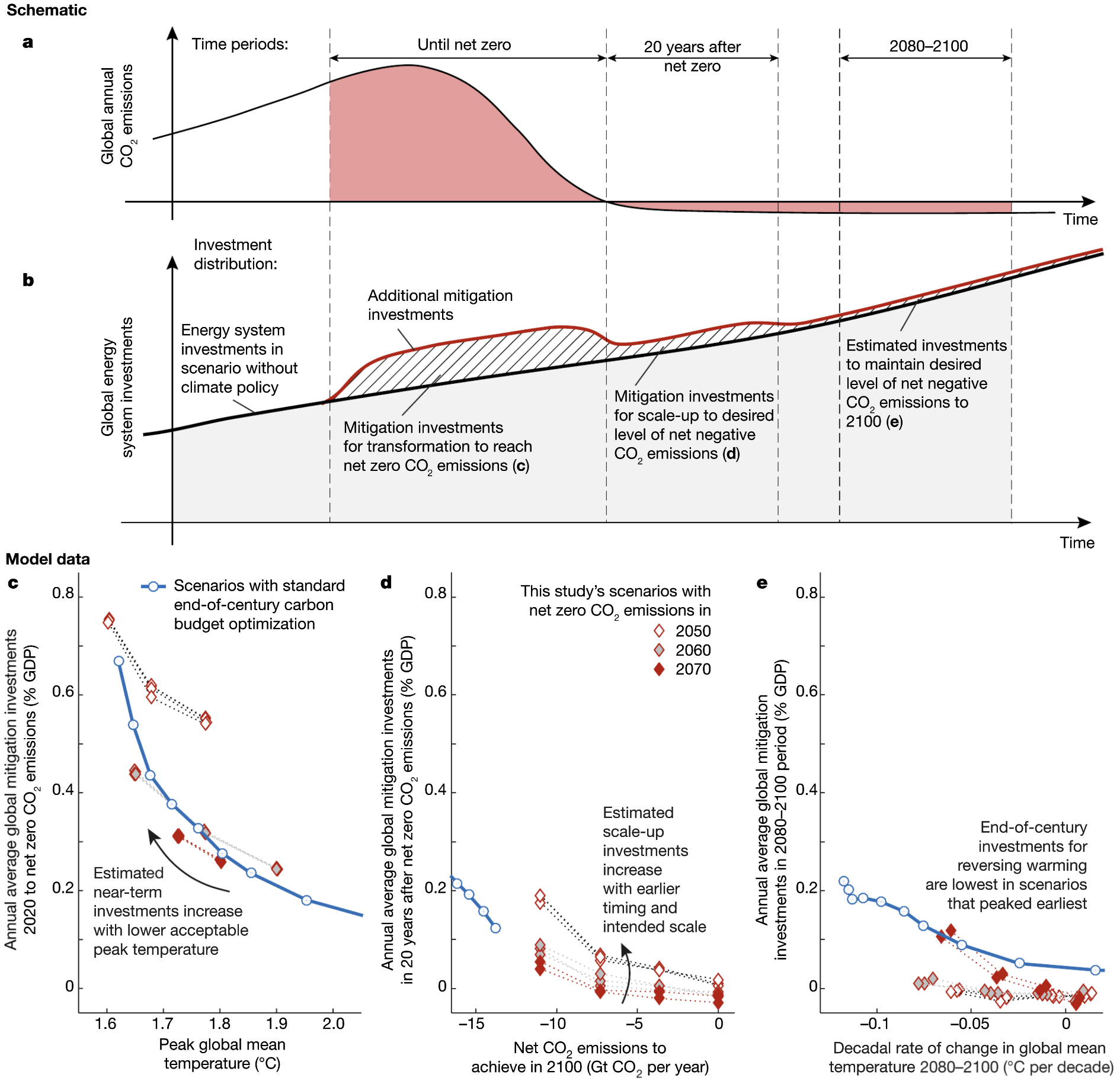 Natural climate solutions (NCS): “20 conservation, restoration, and/or improved land management actions that increase carbon storage and/or avoid greenhouse gas emissions across global forests, wetlands, grasslands, and agricultural lands. We show that NCS can provide over one-third of the cost-effective climate mitigation needed between now and 2030 to stabilize warming to below 2 °C. Alongside aggressive fossil fuel emissions reductions, NCS offer a powerful set of options for nations to deliver on the Paris Climate Agreement while improving soil productivity, cleaning our air and water, and maintaining biodiversity.”

“our existing knowledge reported here provides a solid basis for immediately prioritizing NCS as a cost-effective way to provide 11 PgCO2e y−1 of climate mitigation within the next decade—a terrestrial ecosystem opportunity not fully recognized by prior roadmaps for decarbonization. Delaying implementation of the 20 natural pathways presented here would increase the costs to society for both mitigation and adaptation, while degrading the capacity of natural systems to mitigate climate change and provide other ecosystem services. Regreening the planet through conservation, restoration, and improved land management is a necessary step for our transition to a carbon neutral global economy and a stable climate.” 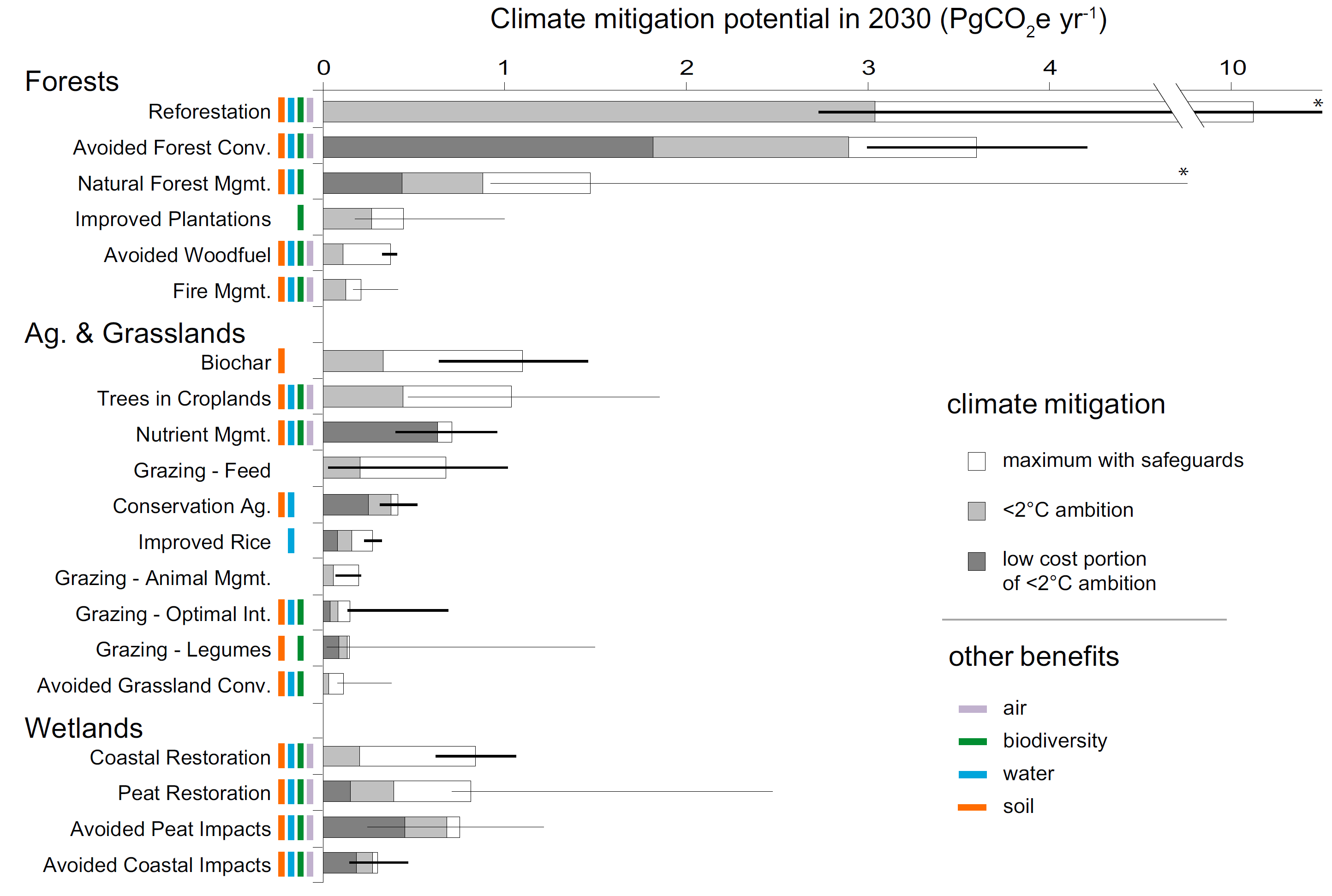 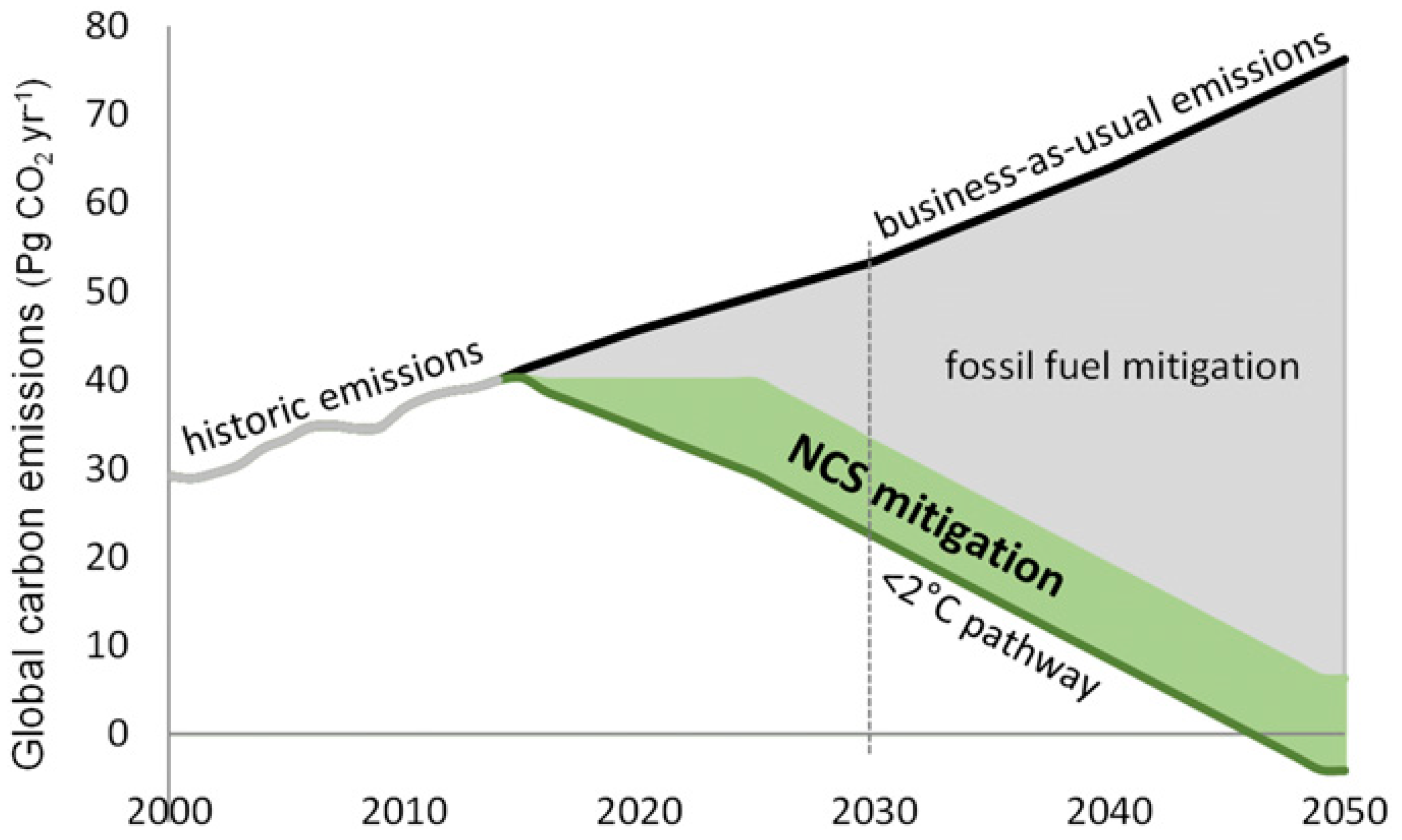 “The green area shows cost effective NCS (aggregate of 20 pathways), offering 37% of needed mitigation through 2030, 29% at year 2030, 20% through 2050, and 9% through 2100. This scenario assumes that NCS are ramped up linearly over the next decade to <2°C levels indicated in Fig. 1 and held at that level (=10.4 PgCO2 y−1, not including other greenhouse gases). It is assumed that fossil fuel emissions are held level over the next decade then decline linearly to reach 7% of current levels by 2050″. 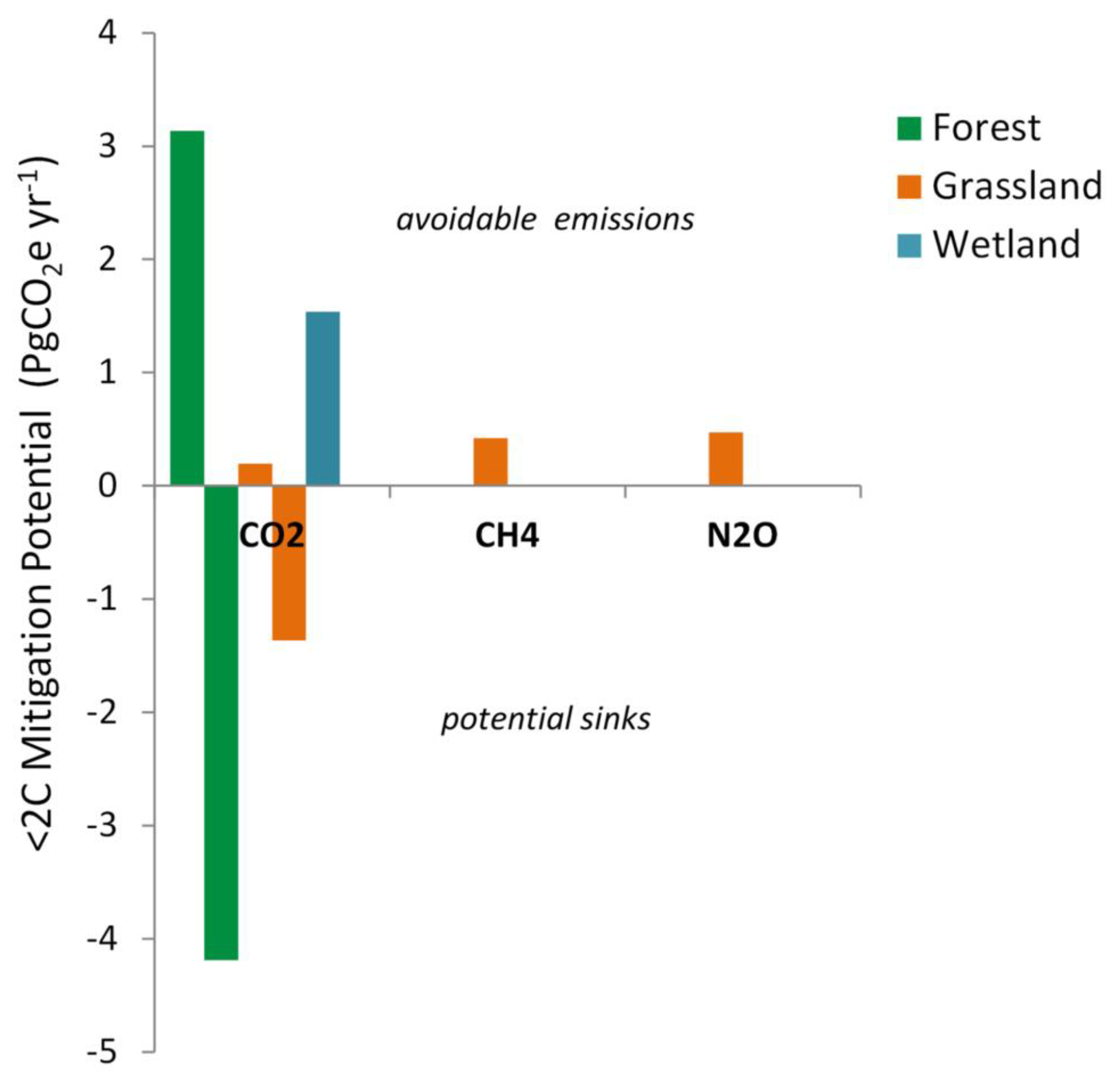 The above article on Natural Climate Solutions is also discussed here:

Analysis: How ‘natural climate solutions’ can reduce the need for BECCS 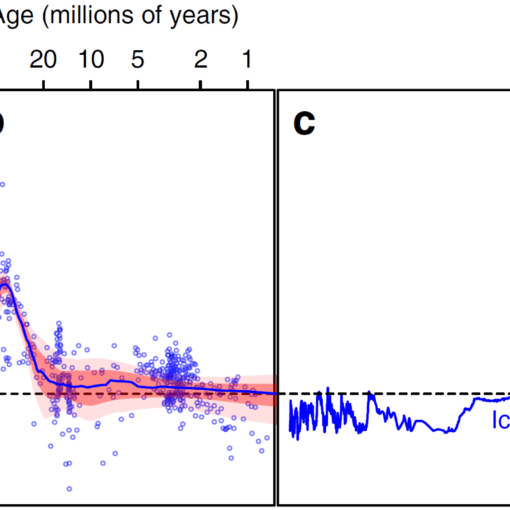 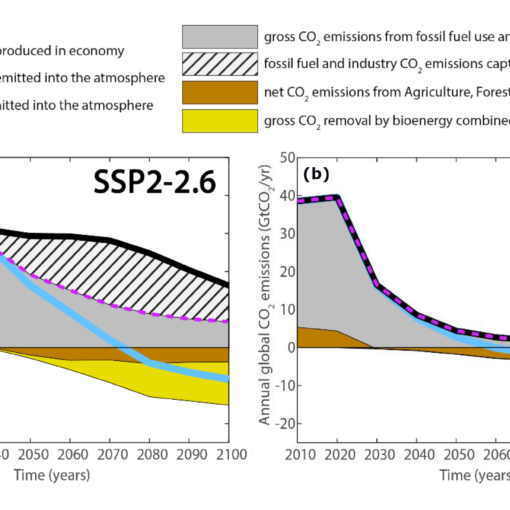